The Peepers, their pasta and future

Around about the time these tackers were little, I fell off the blog, much to the consternation of my regular readers (sorry, Mum). 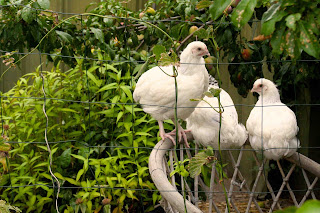 So the internet missed out on hearing about the rambunctious youth of the Peepers. In summary: they grew in stature and wisdom, discovered where the earwigs live, developed an enthusiasm for sow-thistles, ate what I thought was the chook-proof society garlic down to its bulby bottom, befriended Great Aunt Agatha (our seniorest chook), and gradually, somewhere around their thirty-fifth week, started laying eggs, which has only increased their enthusiasm for things they think they can eat.

They are now resplendent young persons in full-fledged chookhood. 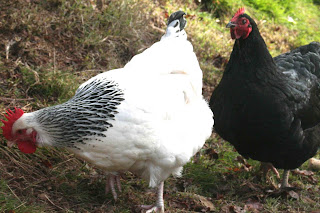 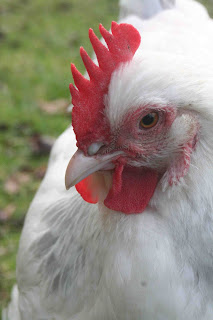 And Marigold, the other Coronation Sussex, in between Albert (left) and one of me mum's flock (right) on holidays in the electro-netted fox-proofed paradise-pastures of Bright: 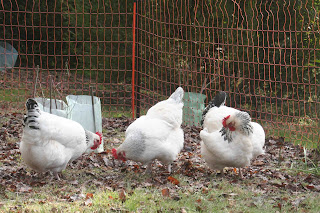 These chooks are the loveliest of birds. They gallop up to us, in a sort of undulating wobble-run, and test out our clothing for tastiness. They're a threesome of equals (I'm sure there's some Latin-based collective noun for the equality of three chickens: triumgallate?). They are also producing a lot of eggs, one each, most days. The senior hens, Esme and Shirley Australorp, and their Welsummer henpanion, Cecily, are producing an additional one to three eggs per day. Agatha remains steadfastly non-ovulatory, as she has been since we stole the cache of nine eggs she was hiding under some garden junk in November 2011. The situation, in short: we've gotta lotta eggs, after not having a lotta eggs for a couple of months (E & S were moulting, C, A, V & M were too young).

A lot of eggs is a good problem to have, really, and we're not lacking for ways to eat them (if we were, we'd give them to neighbours and/or boil them and feed them back to the chooks), but of course I know that this situation is temporary. At least one, probably more, of the hen posse will go broody in late Spring and stop laying. I doubt we'll lack for eggs, but our current ridiculous abundance will surely have to give sooner or later.

Eggs aren't preservable in many forms that I'm prepared to work with. My new go-to exception, though, is ye old egg pasta. I mix one egg with one cup of flour (and some nettle purée, in this case), and end up with enough fettucine for a two person dinner. 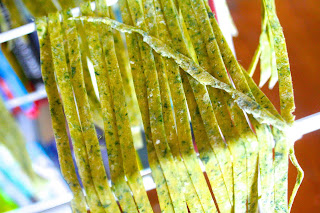 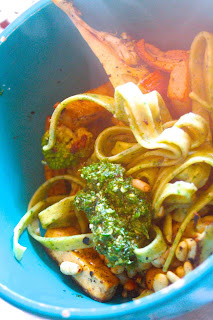 Nettle-egg fettuccine with nettle pesto, broccoli, pine-nuts, and, um, that famous Italian staple, smoked tofu (as you do).

Once the pasta's dry, which happens over-night with the aid of my trusty clothes-horse pasta drying rack, I figure any bacteria sitting around have no way of surviving (because bacteria notoriously require moisture, right? Right?). And so - voila - or viola!, as we like to say in the string section - present egg abundance is turned into future egg-pasta abundance, in what I choose to believe is a completely sanitary and non-salmonella-poisoning system of excellence. Thank you, the Peepers.
Posted by Alexis, Baron von Harlot at 3:59 PM

A brief definition of the author

Alexis, Baron von Harlot
Alexis, Baron von Harlot, is self-appointed Chronicler Laureate to the principality of Lalor, Victoria, Australia, including the lesser adjoining suburbs of Epping and Thomastown, and wherever she happens to be, really. These annals relay her keenly observed observations on matters floral, faunal, anthropological, protozoic, and thingy, with reference to the backyard, down the road, geopolitics, and the complete works of Jeanette Winterson.